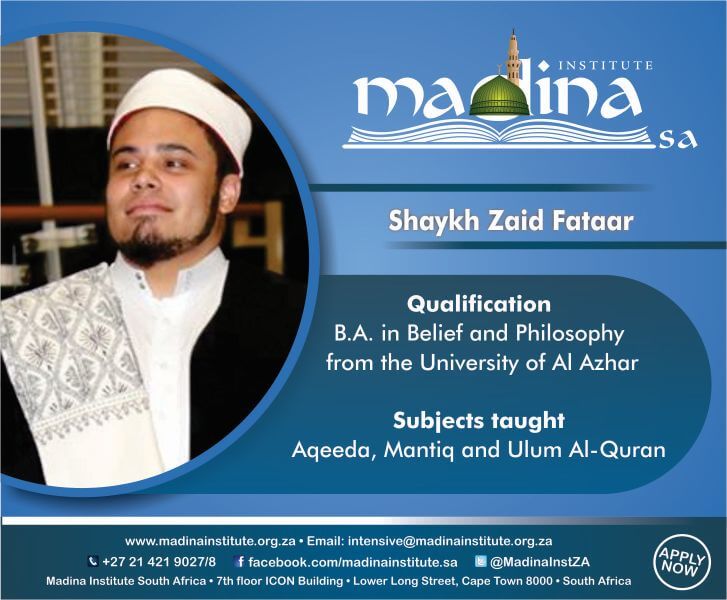 Shaykh Zaid Ibnu Riad Fataar Al-Azhari grew up and started his studies in Egypt Cairo at the age of 6.

Going through the Egyptian Al-Azhar school and college where he achieved a Diploma in Islamic sciences and completed his memorization of the Holy Quran.

He then furthered his studies at the Al-Azhar University in the field of Theology specializing in the sciences of Aqidah (Belief) and Philosophy receiving a B.A in Islamic Theology. Also privately studied under various scholars in Egypt receiving Ijazaat (Authority) in Hadith and Aqidah.

Shaykh Zaid is appointed officially by the minister of home affairs as a marriage officer and commissioner of Oaths.

He Travels in and out South Africa delivering lectures, inspirational talks and classes concentrating especially on the youth. He is a regular guest speaker on radio stations such as the voice of the cape, radio Al-Ansaar. He also has his own show on Star sat satellite which features on DeenTv called Prophetic Breezes concentrating on Fiqh As-Seerah, and he features on other satellite network stations such as ITV.

Also a member of the Muslim Judicial Council, and assistant Dean and H.O.D of Aqidah at the Madina Institute.

Because Shaykh is young by age,his approach with students and people are very enthusiastic, vibrant, warm and respectful never to leave someone without a smile.