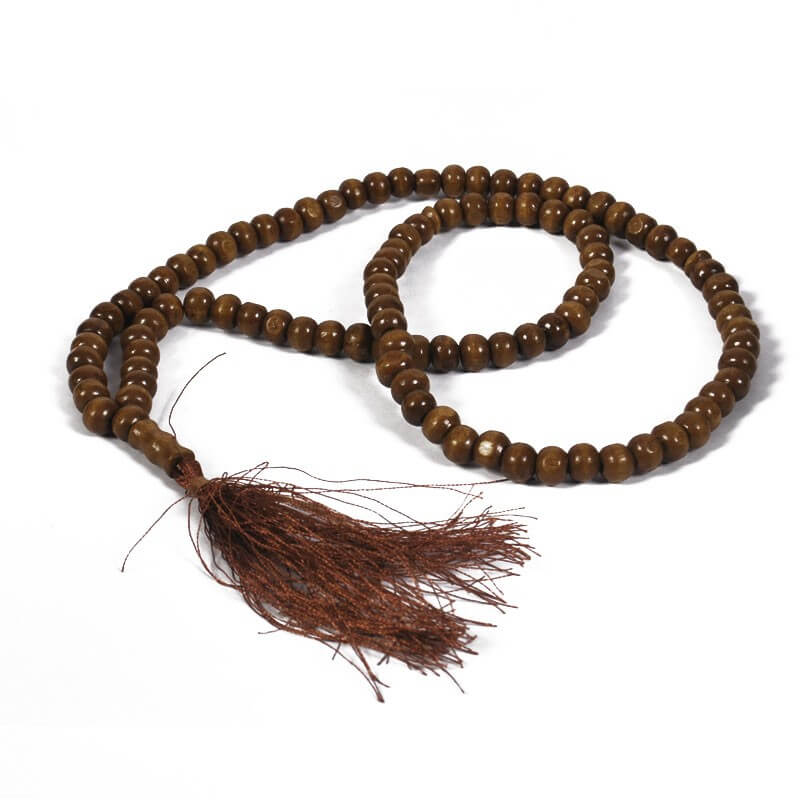 Carrying the sibḥah in our time is a very common practice. It can be seen in the hands of nearly all, from scholars to general Muslims. However, it is something which seemingly is taken too much for granted to the extent that we tend to forget about the origin of this tool. This attitude has ultimately led some people to disregard it, claiming that it is blameworthy.

The Messenger of Allah ( صلى الله عليه وآله وسلم ) used to practice dhikr and for counting he made use of his fingers in line with the then tradition of Arabia. At no point in time did he prohibit the use of any tool or instrument which would facilitate the counting process. It must be emphasised that counting on his fingers was in no way a form of distraction. This was similarly the same when other means of counting were employed by his companions.

Tirmidhī, Ḥākim and Ṭabarānī narrated on the authority of the mother of believers, Şaffiyah that the Messenger of Allah ( صلى الله عليه وآله وسلم ) came to her room when she had 4000 date-stones, she was using to make tasbīḥ.

Abū Dawūd and Tirmidhī narrated on the authority of Sa’d bin abī Waqqās that the Messenger of Allah ( صلى الله عليه وآله وسلم ) entered the room of the mother of believers Şaffiyah bint Huyay whilst she had with her date stones or pebbles with which she was making tasbīḥ.
Ibn Sa’d narrated on the authority of Abū Hurayrah that he used to make tasbīḥ with black and white seeds and in another narration with a string of pebbles. Likewise, Ibn abī Shaybah narrated that Abū Sa’īd al khuḍri used to make tasbīḥ with stones. It is also reported that Abū Huraira possessed a thread with two thousand knots and would not sleep until he had used it all for dhikr and another narration makes mention of one thousand knots. This was narrated in the Jāmi’ al ‘ulūm wa al ḥikam of ibn Rajab al Hanbalī and the Fayḍ ul Qadīr of al Mannāwī It is also reported that Fāṭimah al Nabawiyyah, the daughter of Imam al Ḥusseyn, had a thread stringed with knots with which she would do dhikr. Similarly, S’ad bin abī Waqqās is also reported to have bags of date stones meant for performing dhikr. There are other narrations on this issue. Imam Suyuṭī gathered them in his epistle which he named Al minḥah fī al sibḥah (The Bestowal of the sibḥah). This epistle forms part of his book Al ḥawī. From all the above narrations, we can understand that the use of a sibḥah has been an acceptable practice in the early days of Islam for counting one’s dhikr. The date stones, pebbles and the knots slowly evolved to perforated beads that are gathered like a necklace by a thread, which the worshipper carries to remember his Lord and his litany (wird). Asked about the sibhah, Imam al Junayd made it clear as follows: “It is a means by which I reached to my Lord, therefore I will not leave it.”

To this same interrogation Ḥassan al Baṣrī puts it this way: “I love to remember Allah with my heart, my hand, and my tongue and with my everything.” Other great personalities in taṣawwuf (Sufism) and their followers have a great esteem for the use the sibḥah and perpetuate this long Islamic tradition without paying much heed to the opposers. As for the claim that the sibḥah is from other religions and communities, this is not correct; especially after we have mentioned its early stage and development in the Islamic milieu. If there is some similarity, then it does not mean that we are following them. Anyhow it is important to remember that any form of impartation and imitation is not necessarily prohibited. There is no harm in taking the sibḥah with the intention of honouring the dhikr and glorifying the One being remembered. Likewise, it is not proper etiquette to use it for play and showing off or for merely occupying the hands. It is also not appropriate just to count on it without making dhikr as this equates to lie and vanity. It is not unknown that there is wisdom in the specific number of litanies and using a sibḥah facilitates this. This is clear from what we see in the blessed sunnah.

For example, we find that asking for forgiveness after the ṣalāh is three times, the extended tahlīl (قدير شي ءٍ كل على وهو ويميت يحيي الحمد وله الملك له له، شريك لا وحده الله إلا إله لا) after Fajr and Maghrib is seven times, seeking refuge from the fire is seven times, the taḥmīd, tasbīḥ and takbīr are 33 times each. Likewise, we see the Holy Prophet ( صلى الله عليه وآله وسلم ) asking us to make istighfār 70 or 100 times a day.

The two Imams (Bukhari and Muslim) narrated that the Messenger of Allah ( صلى الله عليه وآله
وسلم ) said: “If one says one-hundred times in one day: قَدِي رٍ شَىْ ءٍ كُ لٍِ عَلَى وَهُوٍَ الْحَمْدُ، وَلَهٍُ الْمُلْكُ، لَهٍُ لَهُ، شَرِيكٍَ لاٍَ وَحْدَهٍُ اللٍَُّ إِلاٍَ إِلَهٍَ لاٍَ
“None has the right to be worshipped but Allah, the Alone Who has no partners, to Him belongs Dominion and to Him belong all the Praises, and He has power over all things (i.e. Omnipotent)”, one will get the reward of freeing ten slaves, and one-hundred good deeds will be written in his account, and one-hundred bad deeds will be wiped off or erased from his account. Moreover, on that day he will be protected from the morning till evening from Satan, and nobody will be superior to him except one who has done more good than that what he has done.” He (وسلم وآله عليه الله صلى ) also said: “Whoever says, وَبِحَمْدِهٍِ اللٍَِّ سُبْحَانٍَ ,”Glory be to Allah and Praise be to Him”, one hundred times a day, will be forgiven all his sins even if they were as much as the foam of the sea.1

Our beloved Prophet ( صلى الله عليه وآله وسلم ) also said that: “Whoever says on a Friday eighty times:
اللهم صل على محمد الن ب الأ م وعلى آله وسلم
“O Allah sends prayers and salutations upon Muhammad, the unlettered Prophet, and upon his household,” the sins of eighty years will be forgiven for him.”2

From the above, we see that there is special emphasis on the specification of the number of dhikr. Thus, the use of the tasbih which is merely an easy counting device helps in adhering to these sunnah and remains still within the same spirit of the use of stones/seeds/knots/thread etc in the early days of Islam under the implicit blessing of our beloved Prophet ( صلى الله عليه وآله
وسلم ).