With no pun intended how ironic is it that Human Rights Day falls in the month of March where as a homograph to march means so much more to a fight for liberation. It takes just one person selfless to the truth, seeking justice, equality & human dignity to make a difference but the support of the masses has power in numbers.

“Islam, the religion of Haqq, justice and freedom came into a place and time where oppression was the rule, slavery was a tool to humiliate the weak, killings a way to solve problems. A society fueled by feuds, raging by violence, and merely being born in the wrong family could mean eternal slavery, oppression, and stripping of any and all rights.

The Beloved Prophet, sallallahu alayhi wa aalihi wa sallam, emerged as the voice denouncing those ways while striving to ensure justice and equality.

By endangering himself, he -sallallahu alayhi wa aalihi wa sallam, gave us one of the most precious monotheistic gifts, namely the collective duty of self criticism. Speak the truth though against yourself. Support the Haqq, denounce the Batel. Stand with the Haqq, abandon the Batel. Stand up to oppressors and tyrants, no matter of the price.

The Seerah of the Beloved Prophet, sallallahu alayhi wa aalihi wa sallam, taken as a whole, may be summarized as a succession of victories of Haqq over Batel, of Justice over Tyranny, of Freedom over Slavery…

If the Beloved Prophet, sallallahu alayhi wa aalihi wa sallam, has taught us anything, then among the many, he taught us an important lesson. One that the Qur’an amplified numerously: It does not require a majority to prevail, but rather a profoundly faithful few, who are keen to uphold the truth and sacrifice for it.”
(Shaykh Muhammad Al Ninowy~2016)

On this beautiful Jumuah reflect on the selfless bravery of our Beloved & ask yourself if you are a spectator to injustice or the custodian of a Legacy of Haqq. 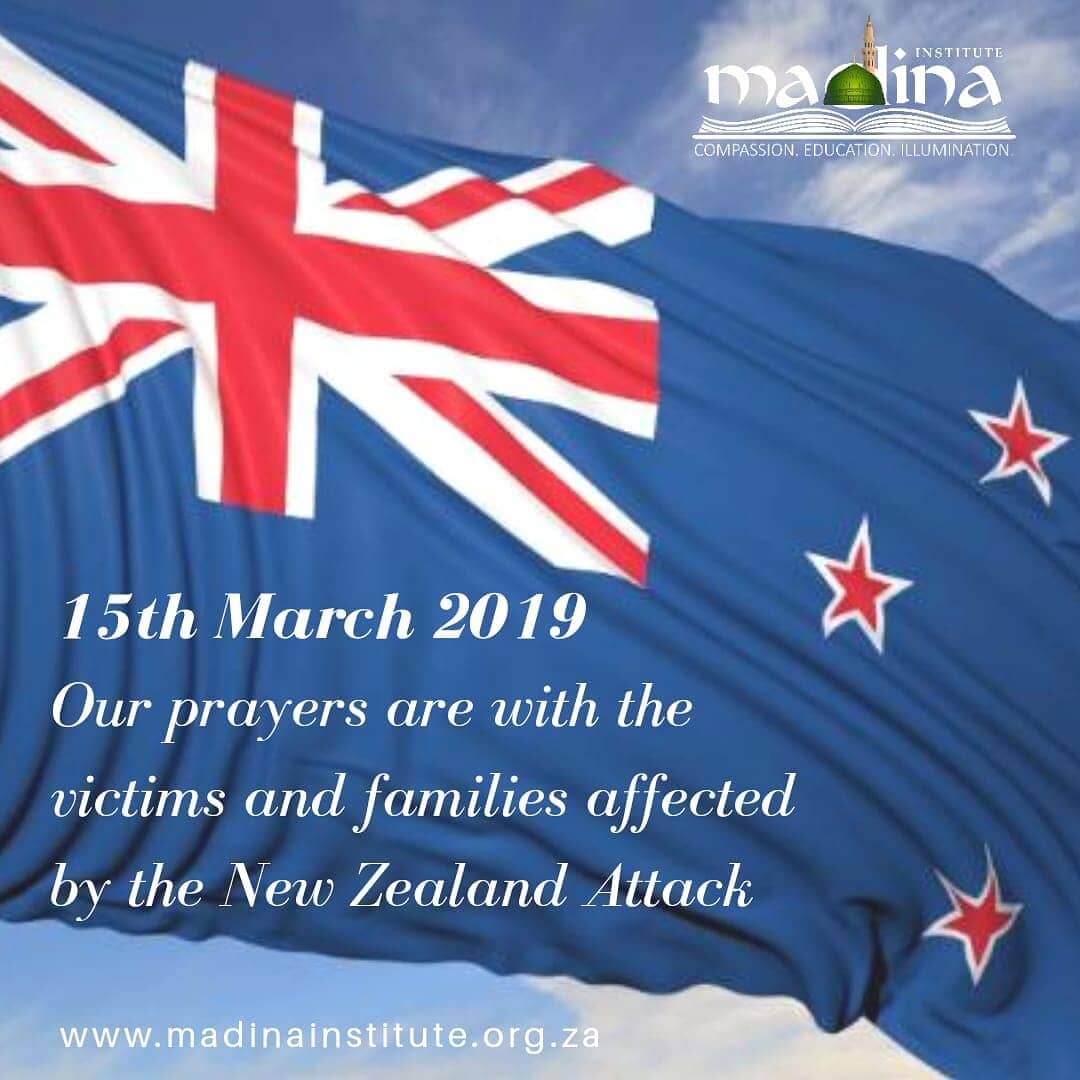 On this Mubarak day of Jumuah we are troubled by the senseless attack & merciless killing on the Musallis of a Masjid in Christchurch, New Zealand.

We hope that authorities will allow the long arm of the law to ensure justice is served.

We extend our heartfelt Duas to the community & bereaved families.

We call on the Muslim community to denounce any attempts of instilling fear in our brothers & sisters in practising their Din. We revoke all calls to close any Masjids as a solution to safety. We instead invite communities to increase the interfaith Relations between religious sects to empower communities with knowledge to basic human rights, dignity & freedom of religion.

Madina Institute is a global institute of esteemed Quranic, hadith & Islamic science studies. Its programs of Usul al-Din has recently been provisionally registered for an accredited BA degree by the Department of Higher Education in South Africa. Its registration for its first complement of BA students has commenced this 2019 & applications for 2020 opens as early as the 4th of February 2019. Bursaries are on offer with the annual Madina pledge line expected in the month of Ramadan.

A highlight for many of the students since 2014 are the lectures by the honourable founder, Shaykh Dr Muhammad al Ninowy (Syria/USA) who is a noted Muhaddithin of the century.

This year the classes are being made accessible to the public who may enjoy an open week to lectures that will be held at Masjidul Quds in Gatesville starting Monday the 4th of February 2019 to Thursday the 7th of February 2019 from 10.30 am to 3 pm, and, Friday the 8th of February 2019 between 10.30 & 11.30am. The classes will be on Aqeedah Tahawiyyah:
“Essentials of Islamic Belief based on the Holy Quran & authentic Sunnah”.

The public is invited to join all ‘The Pursuit of Knowledge Tour 2019’ events:

Provisional Program as at Print:

“Dhikr, the key to purify the heart & control the Nafs”

Jumuah at Masjidul Ghiedmatiel Islamia (Taronga Rd)
“The Farewell sermon: a message to the Ummah in crisis”

“The essential ingredients to a Successful Marriage”

The invitation enables the Madina experience for all those wanting to study at the institute.

Attendees may register and attain further details at:

Media Desk
info@madinainstitute.org.za
www.madinainstitute.org.za
+27 (0) 21 421 9027/8
Whatsapp: +27622814898
Apply Online – https://madinainstitute.org.za/applications/usul-al-din-islamic-studies-application-2019/
Press Release
Friday, 4 January 2019
Cape Town, South Africa
Madina celebrates 2018 Matric results with Bursaries for 2019
Matric is the Eid of your schooling career before hastening as young adults into a career path or ambition.
We are so blessed in South Africa to have graduated into equal education for all. There are many countries globally that are still fighting this human right. We, however, cannot overlook that poverty plays a huge roll in the uneven terrain of literate vs illiterate. Along with the pandemic of poverty, there is a break down in moral fabric, values, social cohesion and development, ill health and inaccessibility to facilities of human dignity and life.
Islam is a way of life irrespective of your financial status. It’s teachings conquer the scourges of poverty with a strong moral code, purpose and divine instruction to live a life of success. From the basic call to prayer 5 times a day, to the dialogue of learned scholars and the encouraged practises and teachings of the Prophet Muhammad, peace be upon him, Islam invests in living life with purpose and servitude between Creator and Creation.  It’s teachings of ‘Love, Tolerance and Kindness’, are healers, liberating people from the calamities of man’s own destruction. If followed correctly it embraces a world of peace from that very first meeting of Salaam.
At Madina Institute South Africa we advocate living a life of purpose, servitude, gratitude and success through enabling students/academics/entrepreneurs among others with the in-depth teachings of the Quranic Sciences and Prophetic Model.
As noted earlier the Eid of your schooling career is Matric but the Eid of your journey beyond that is your ability to confidently take on the world at the best of your ability aligned with the prophetic instruction.
Madina Institute South Africa Usul al Din enables this confidence by offering you one of two programs, that is, the one year or the newly provisionally registered accredited 3 year Bachelor of Arts in Usul al Din by the Department of Higher Education.
Since 2014 it has empowered communities and the corporate sector with alumni who are positively serving and contributing to social development and upliftment.
You have a few questions to ask yourself, like, am I living my life with purpose? Am I truly successful? What is success?
Not only has the institute become a beacon of hope for South Africa, but it has extended its accessibility to students of excellence by raising the necessary funds for student bursaries valued at R42 000 per student.
Applications for 2019 closes on the 9th of January 2019, thereafter applications may be considered with a penalty fee. Those with a bachelor’s pass needed for the BA degree or Matric for the 1-year program needs to apply at soonest.
We applaud the Matrics of 2018 and invite you to live a life of success through purpose. At Madina Institute South Africa your success matters.
Any Queries Contact
Media Desk
info@madinainstitute.org.za
www.madinainstitute.org.za
+27 (0) 21 421 9027/8
Apply Online – https://madinainstitute.org.za/applications/usul-al-din-islamic-studies-application-2019/